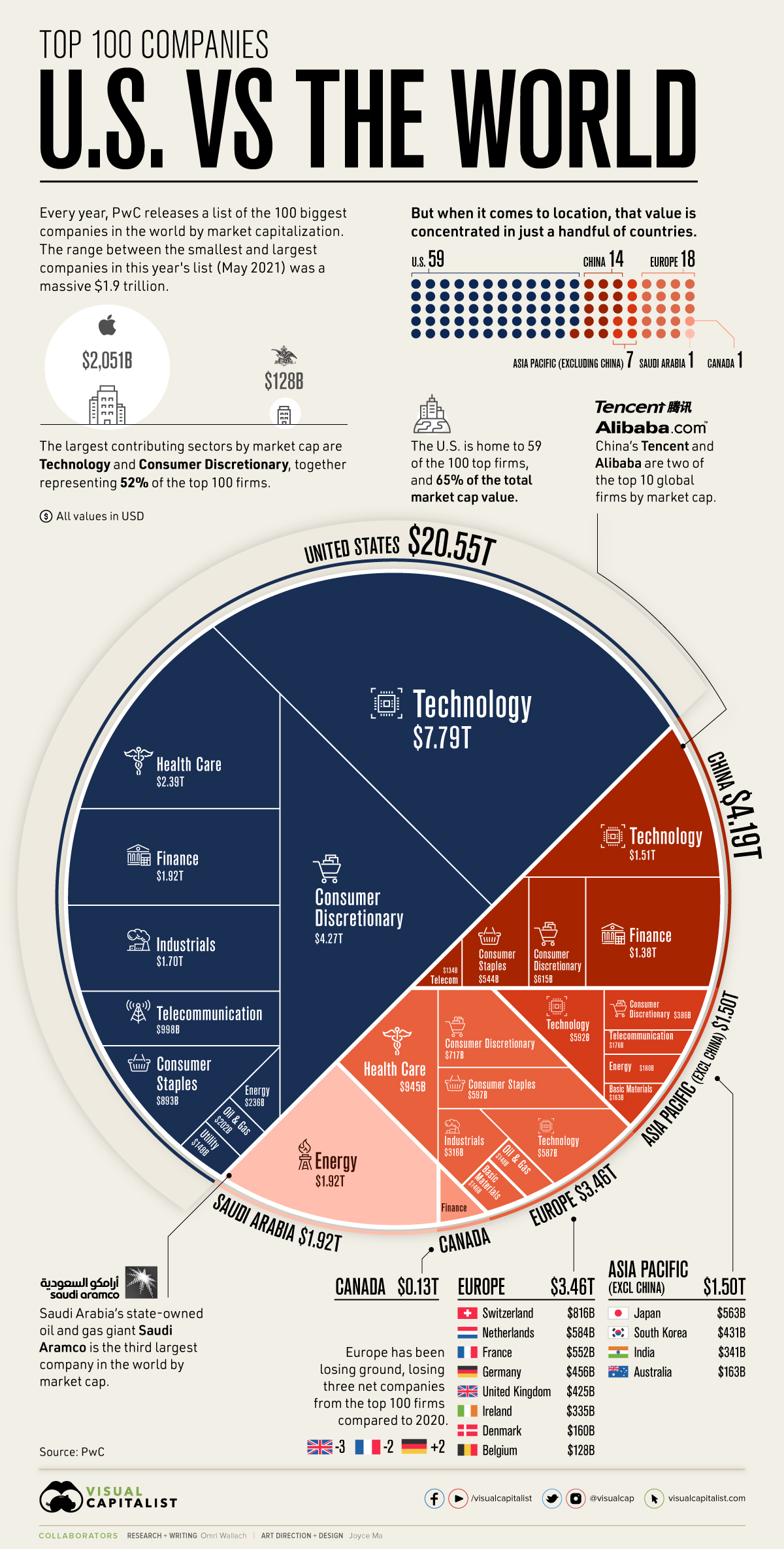 Can I share this graphic?
Yes. Visualizations are free to share and post in their original form across the web—even for publishers. Please link back to this page and attribute Visual Capitalist.

When do I need a license?
Licenses are required for some commercial uses, translations, or layout modifications. You can even whitelabel our visualizations. Explore your options.

The Top 100 Companies of the World: U.S. vs Everyone

When it comes to breaking down the top 100 companies of the world, the United States still commands the largest slice of the pie.

Throughout the 20th century and before globalization reached its current peaks, American companies made the country an economic powerhouse and the source of a majority of global market value.

But even as countries like China have made headway with multi-billion dollar companies of their own, and the market’s most important sectors have shifted, the U.S. has managed to stay on top.

How do the top 100 companies of the world stack up? This visualization pulls from PwC’s annual ranking of the world’s largest companies, using market capitalization data from May 2021.

Where are the World’s Largest Companies Located?

The world’s top 100 companies account for a massive $31.7 trillion in market cap, but that wealth is not distributed evenly.

Between companies, there’s a wide range of market caps. For example, the difference between the world’s largest company (Apple) and the 100th largest (Anheuser-Busch) is $1.9 trillion.

And between countries, that divide becomes even more stark. Of the 16 countries with companies making the top 100 ranking, the U.S. accounts for 65% of the total market cap value.

Compared to the U.S., other once-prominent markets like Japan, France, and the UK have seen their share of the world’s top 100 companies falter over the years. In fact, all of Europe accounts for just $3.46 trillion or 11% of the total market cap value of the list.

A major reason for the U.S. dominance in market values is a shift in important industries and contributors. Of the world’s top 100 companies, 52% were based in either technology or consumer discretionary, and the current largest players like Apple, Alphabet, Tesla, and Walmart are all American-based.

The Top 100 Companies of the World: Competition From China

The biggest and most impressive competitor to the U.S. is China.

Impressively, China’s rise in market value isn’t limited to well-known tech and consumer companies. The country’s second biggest contributing industry to the top 100 firms was finance, once also the most valuable sector in the U.S. (currently 4th behind tech, consumer discretionary, and health care).

As Europe continues to lose ground year-over-year and the rest of Asia struggles to keep up, the top 100 companies might become increasingly concentrated in just the U.S. and China. The question is, will the imbalance of global market value start to even out, or become even bigger?

The post The Top 100 Companies of the World: The U.S. vs Everyone Else appeared first on Visual Capitalist.